Taylor Ward has announced she is expecting her first child with her husband and footballer,  Riyad Mahrez.

The model, 23, and the Manchester City footballer, 30, took to Instagram to share the news from the Maldives.

The couple shared a snap of them on the beach holding up a string of ultrasound pictures, while Riyad cradled Taylor’s baby bump. 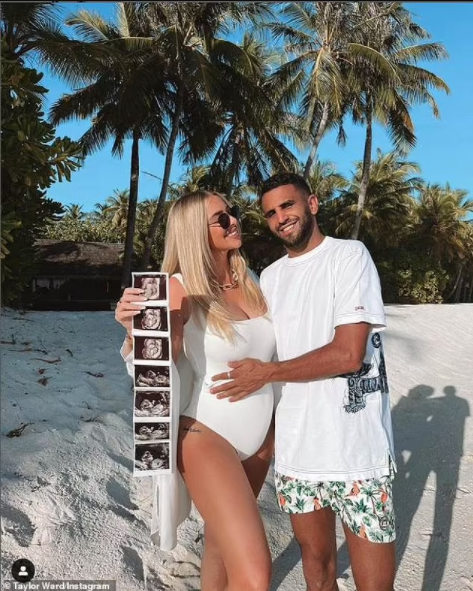 Taylor, who is the daughter of Real Housewives Of Cheshire star Dawn Ward, showed off her blossoming bump in a white swimsuit, as she beamed from ear to ear.

The happy news comes after it was announced last month that Taylor ‘secretly married’ Riyad late last year after he previously proposed with a £400,000 ring.

The couple wed at a Muslim ceremony known as the Nikah and signed a contract to ensure they were legally married under Islamic law, The Sun reports.

Taylor confirmed she had married Riyad in an Instagram Story posted in January, revealing the couple were also planning another ceremony in the UK to make their marriage legal back home.

Winger Riyad was previously married for six years to Rita Johal and shares two daughters with his ex-wife.